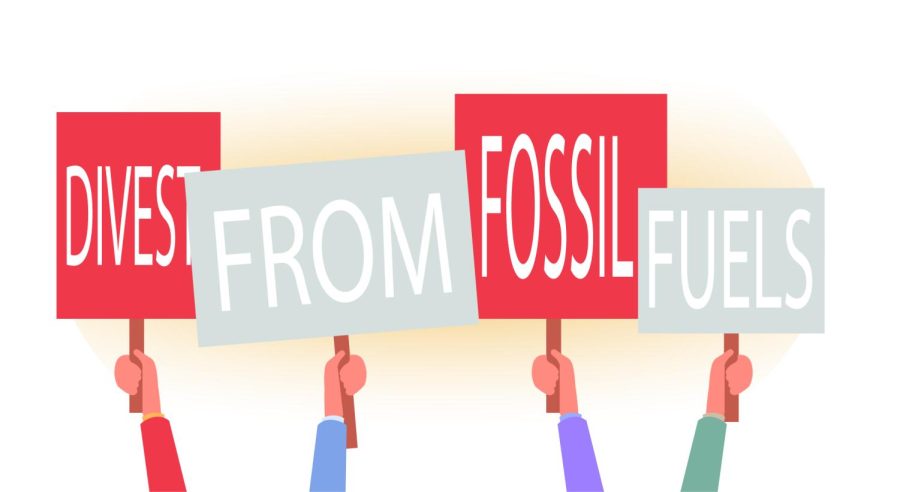 WSU’s Environmental Sustainability Alliance is calling on WSU to turn over its endowment funds to fossil fuel companies in an effort to fight climate change.

ESA calls on WSU to divest itself of the so-called “Underground Carbon 200”, the 100 public coal companies and 100 public oil and natural gas companies ranked globally by the size of their carbon reserves, and to invest, instead, in companies providing green products, renewable energy, said retired professor William Engels.

Engels and WSU alum Simon Smith first raised the issue at the Board of Regents on September 17, 2021.

Last fall, Engels presented the reasons for a divestment campaign at WSU to the ESA. He has since worked alongside the student organization on this issue, and ESA has commented at every Board of Regents meeting.

“We are not asking the university to make a sacrifice that will jeopardize the financial well-being of the institution. In fact, it will make it safer,” Engels said.

Other nations, countries and institutions have turned to alternative energy sources, creating an uncertain future for fossil fuels. Because of this, fossil fuel companies are no longer a safe investment, Engels said.

If WSU does not act, sooner or later they will be burdened with stranded or devalued assets. A well-managed shift of investments from fossil fuels to clean energy is the fiscally responsible thing to do, Engels said.

Divestment undermines the political power of fossil fuel companies, holding them accountable for their unregulated carbon pollution, says a step by step guide on the divestment of the Global Fossil Fuel Divestment Commitments Database.

“As we all know, the biggest offenders and contributors to climate change are not us, but big business, those fossil fuel companies that drill for oil and coal,” said the ESA President, Stevie Fawcett.

The biggest impact students can have is lobbying a big player like WSU to take money out of this industry, Fawcett said.

There are many examples of other institutions that have done this successfully, including Harvard University, Oregon State University and Seattle University, Engels said.

Worldwide, more than 1,500 institutions have committed to some level of divestment, according to the Global Fossil Fuel Divestment Pledges Database.

“This is a really big opportunity to have a big impact on a global scale, for what I consider to be the biggest issue in the world right now,” Fawcett said.

There is also support from professors, students and other organizations on this issue. In a survey sent by ESA in November 2021, 70% of the 1,051 students who responded agreed that WSU should divest from fossil fuels.

Students have the power, Fawcett said. Issues like climate change and fossil fuel divestment sound daunting, but in reality, the majority hold the power.

“We actually have a plan, it’s not just a complaint we’re filing at WSU. We have a very big opportunity here – can we take advantage of it? said Fawcett.

ESA has received limited communications from the Board of Regents on this issue, although the board has confirmed that some fossil fuel investments are included in the endowments, Engels said.

The ESA was also informed that there had been no conversation on the subject before the matter was brought before the board last fall, he said.

At a January 20 Board Committee meeting, WSU Foundation CEO Mike Connell presented the status of fossil fuel divestment, as well as its connection to environmental, social and governance investments. .

ESG investment strategies involve the consideration of non-financial factors in investment companies, according to the CFA Institute.

ESG investing is an ongoing effort of the investment committee, which is responsible for investing in both foundation and university assets that are endowed, Connell said.

“People need to know that we’re working not just on the fossil fuel immediacy, but on a set of longer-term goals and objectives,” WSU President Kirk Schulz said at the meeting. committee.

Currently, ESA is considering creating two petitions, one for students and another for local organizations. They hope to make them available soon and present the results to the WSU administration, said ESA Treasurer Ryan Culp.

They advise students to look for the petition online as well as the petition bulletin board in the Compton Union Building, Engels said.

ESA encourages students and organizations to join them in spreading the word as they campaign to free WSU from fossil fuels.

“I would strongly, strongly encourage students who care even a little bit about these issues to get involved…because you definitely have the power, you can make a huge difference,” Fawcett said.

The ESA meets at 5:30 p.m. every other Tuesday in room 206 of the CUB. Their next meeting will be on February 15. The biggest thing students can do is come to these meetings and get involved, Fawcett said. ESA can also be contacted at [email protected].

2022-02-08
Previous Post: The risks and responsibilities associated with the transport of Li-Ion batteries
Next Post: Boeing agrees to purchase SAFs for commercial purposes