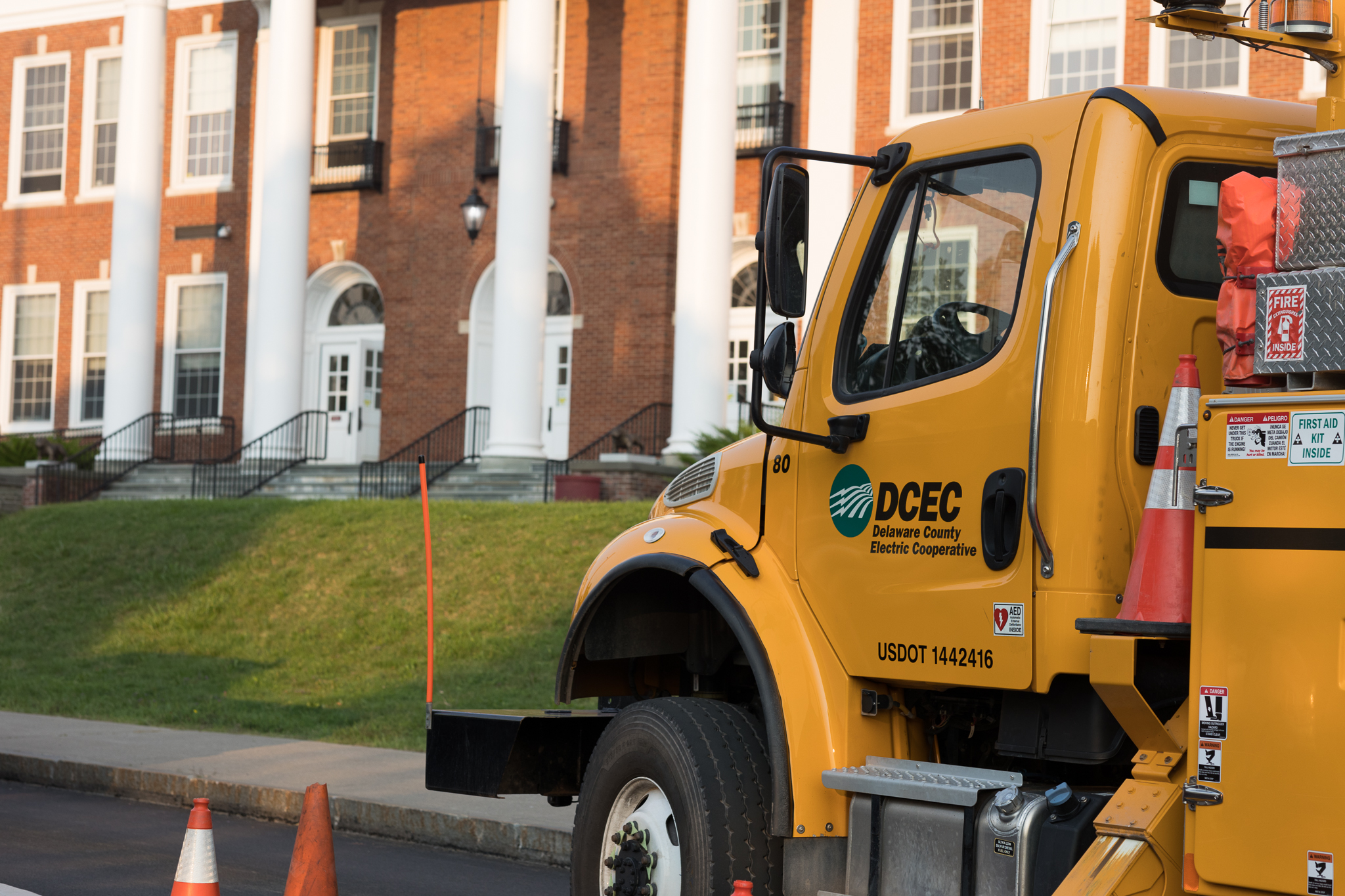 MARGARETVILLE — As the new CEO of the Delaware County Electric Cooperative, fresh from Indiana, John Gasstrom is still getting to know the territory.

In his first weeks on the job, Gasstrom trekked through the rolling green hills of the rural Catskills, where DCEC provides power to its 4,800 customers, mostly households and farms. As one of four small rural electric co-operatives in New York City, DCEC serves as a local utility to some of Delaware County’s most remote areas, as well as shards of Schoharie, Otsego, and Chenango counties.

He also looked at a whole new landscape of federal energy policy. The Cut Inflation Act, signed into law by President Joe Biden on August 16, contains a host of new incentives for clean energy and transitioning the economy away from fossil fuels, ranging from tax credits individual to policies aimed at entire sectors of industry.

For rural electric co-ops like DCEC, the bill could be transformative. Because co-ops operate as nonprofits and pay no federal taxes, they have long been unable to take advantage of federal renewable energy development tax credits. But new ‘direct payment’ provisions in the IRA will change that, allowing co-operatives, municipalities and other not-for-profit entities to receive payments to invest in or produce their own carbon-free renewable energy, freeing them up thus to compete with private energy developers. .

The IRA also includes $9.7 billion for a US Department of Agriculture program that will provide grants and forgivable loans to rural electric cooperatives pursuing climate-friendly energy projects.

“This will mean not just more jobs, it’s not just going to mean cleaner energy. It will also result in lower utility costs for Americans living in rural areas,” said US Secretary of Agriculture Tom Vilsack, who embarked on a whirlwind tour to talk about the rural provisions of the proposed law after it was passed last month.

If you live far out of town and your house lights come on with the flick of a switch, you can thank a rural electricity co-op.

A century ago, it was rare for rural farms and households in the United States to have electricity. This changed in 1936 when the Rural Electrification Act made new federal funding available for rural electricity, triggering the creation of member-owned rural electricity cooperatives across the country. In the years that followed, rural cooperatives built power lines in the most remote and challenging areas of the country, transforming rural and agricultural life in communities across the country.

Erik Hatlestad directs the Energy Democracy Program at CURE Minnesota and is one of the authors of “Rural Electrification 2.0,” a 2019 report that influenced the development of the IRA’s climate provisions for rural electric cooperatives. He believes the IRA will usher in another era of rural energy transformation, helping rural cooperatives shut down aging fossil fuel power stations and build new infrastructure.

“What we’re asking co-ops to do is totally reinvent the rural electricity system,” he said.

Like most climate policies in the federal bill, the provisions for rural electric co-ops are a carrot, not a stick: New tax credits and federal funding will boost zero-carbon renewable energy , nuclear, carbon storage and grid resilience projects, injecting new investments into cooperatives and accelerating the decarbonization of the electricity grid in the most rural areas of the country.

Hatlestad said direct-pay tax credits for renewable energy projects in the IRA, along with the new $9.7 billion USDA program, represent the largest new investment in rural energy since the New Deal. For rural co-ops that are burdened with legacy debt and simply struggling to maintain their existing infrastructure, financing could be transformative.

The National Rural Electric Cooperative Association, the trade organization that represents American electric cooperatives, celebrated the passage of the bill in a press release in August. “Providing direct incentives to cooperatives has been one of NRECA’s main legislative objectives,” the group said.

Will rural cooperatives be supportive of climate solutions?

While co-op leaders are widely celebrating the passage of the IRA, climate action has not been a top priority for most rural electric co-ops. The DCEC is no exception. Recently, co-op management pushed back on New York State’s efforts to implement the state’s 2019 climate law, the Climate Leadership and Community Protection Act.

In April, DCEC Board Chairman Edward “Rusty” Pick, Jr. testified before the Delaware County Board of Supervisors in support of a resolution opposing the proposed plan of the state for implementing the CLCPA, telling county officials that the county’s electrical infrastructure was unprepared for projected increases in electricity demand driven by moving home heating and vehicles out of the way. fossil fuels.

Hatlestad said it’s fairly typical for rural electricity co-ops — much like their larger cousins, investor-owned utilities — to push back on efforts to decarbonize the grid. In the 1930s and 1940s, Hatlestad said, strong rural progressive movements pushed for successful federal investments in rural infrastructure.

But nearly a century later, these movements have lost most of their muscle – and in the modern age, rather than pushing to rebuild these coalitions, rural electric cooperatives have mostly doubled down on their opposing climate goals.

“What we’re seeing, instead of doubling down on more progressive policy that would make more federal investments in rural communities, is kind of a total blockage of the good, smart climate policy that we need,” he said. he declares.

But Hatlestad hopes further investment could change that dynamic.

“We’re basically dealing with community-led federal projects that don’t have the resources to move forward,” he said. “But now they do. Now they have a rural energy transition down payment.

A chance for DCEC to gain power

While some large rural electric co-ops in the United States own and operate their own fossil-fuel-fired power plants, DCEC — like many co-ops in the rural northeast — focuses on delivering electricity to customers, not its own. production. The electricity that DCEC sells to its rural members comes from hydroelectric plants operated by the New York Power Authority, a quasi-public state authority that sells low-cost electricity to businesses, local governments and nonprofits in New York.

But building its own zero-carbon energy is a long-standing ambition for the cooperative. For years, the DCEC pursued plans to build up to 63 megawatts of hydropower on four of upstate New York’s large reservoirs, though those plans ultimately fell through.

In 2008, DCEC applied for a federal permit for the project, but the cooperative’s efforts were thwarted by the city’s water agency, Department of Environmental Protection, which applied for and received its own permit to develop electricity on the reservoirs. The failure of the project to materialize was a bitter disappointment for the DCEC management.

Now, pay-as-you-go tax credits for solar, wind and battery storage projects could once again enable DCEC to produce its own electricity. While state law prohibits large utilities owned by New York investors from building and owning power plants, Gasstrom said no such restrictions apply to co-ops — though DCEC should negotiate new purchase agreements with NYPA before it can build one of its own power.

“We are excited about the funding opportunities that exist,” Gasstrom said.

The IRA is complicated legislation, and the DCEC, like other rural co-operatives, is still looking at the new provisions of this Bill and last year’s bipartisan Infrastructure Bill to see what opportunities might work best for its territory. “There is so much in these two bills that have been passed. We just have to dig into it,” Gasstrom said.

He says he expects the new climate bill to be a hot topic among the DCEC’s most committed member-owners, whom he’s getting to know as he gets closer. settles into his new job.

Hatlestad believes that the electricity consumers who make up cooperative members have a vital role to play in guiding new IRA investment in rural electricity systems.

“I think co-op member-owners, by advocating for and participating in the democratic ownership of their co-ops, can make a difference in how that money is deployed,” Hatlestad said. “This is a huge opportunity for co-ops to listen to their member-owners and deploy things that really build network resilience.”

Gasstrom says he looks forward to hearing from the members.