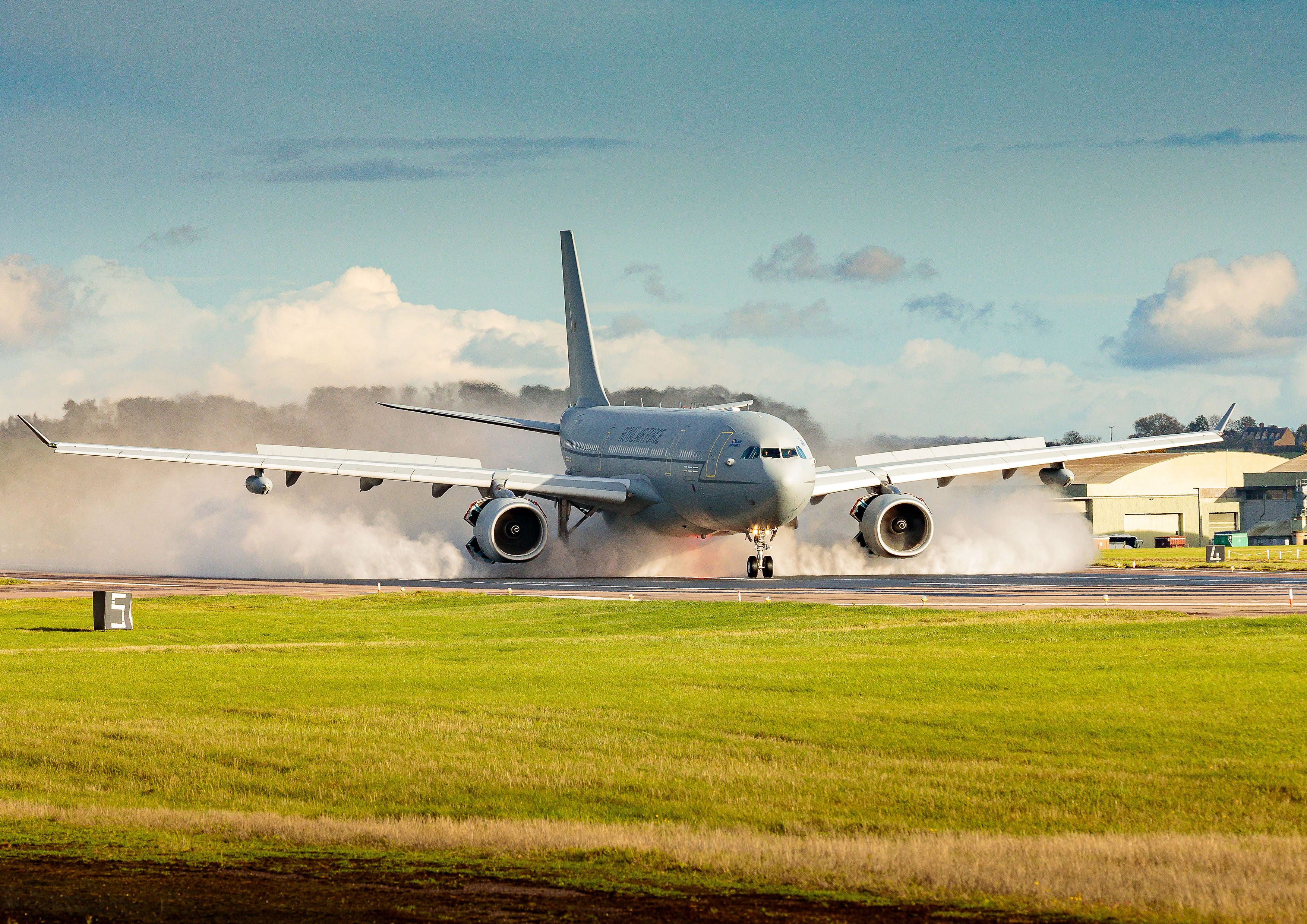 The UK’s Royal Air Force (RAF), alongside industry partners such as Airbus and Rolls-Royce, conducted the world’s first flight using 100% sustainable aviation fuel (SAF) using an operational military aircraft. The flight took place using an RAF Voyager, the military variant of the Airbus A330 commercial airliner, and marked the first 100% SAF flight of any aircraft type performed in UK airspace .

The mission was a joint venture between the RAF, aircraft manufacturer Airbus, the UK Ministry of Defence’s Defense Equipment and Support Agency, UK aircraft leasing company AirTanker and engine manufacturer Rolls-Royce , with fuel supplied by Air bp. Senior officials from the RAF, Ministry of Defense (MoD) and industry representatives were on hand to witness the event, with UK Defense Secretary Baroness Goldie expressing her excitement at the moment:

The Royal Air Force has completed the UK’s first military air transport flight using 100% sustainable aviation fuel on one of its operational Voyager aircraft. They should be rightly proud of this achievement; this is a watershed moment for the RAF and an exciting development for the MOD.

Through the RAF’s pioneering spirit, expertise and partnership with UK industry, UK science and engineering is leading the way in improving operational resilience and developing future operational capability in a world of climate change.

The RAF flies 10 Voyagers in total, including one with a particularly patriotic paint scheme used for state visits around the world.

The demonstration flight lasted approximately 90 minutes and replicated an aerial refueling sortie, a vital and common mission for air forces around the world. The RAF said the mission demonstrated the potential for its future operational capability, ensuring the ability to contribute to UK defense where and when, as the RAF races towards its goal of being Net Zero by 2040. Pilot test pilot and flight captain, Jesus Ruiz, confirmed that the flight went well:

“From the crew’s point of view, the SAF operation was ‘seamless’, which means that no differences were observed operationally. The test plan was comprehensive and robust and allowed us to compare SAF with JET1 resulting in flight without a single drop of fossil fuel.”

“Teamwork has been a key contributor, harmonizing the experience of Airbus, Rolls-Royce and the RAF. We are very proud to be a small part of this huge milestone for sustainable aviation.”

The mission is part of the government’s Net Zero 2050 target and Jet Zero strategy, which includes plans for the RAF’s first Net Zero air base by 2025.

FAS on the rise

Sustainable Aviation Fuel reduces lifecycle carbon emissions by up to 80% compared to the conventional fuel it replaces, as the SAF used on the flight is made from used cooking oil. The RAF is seeking to reduce its reliance on global supply chains and improve operational resilience by reducing the need for refueling.

SAF, created from sustainable waste-based raw materials, is one of several approaches currently being investigated by the Department of Defense, which has found that different approaches would be suitable for other platforms and environments. The result is a range of alternative fuel options being explored to ensure the UK is at the forefront of this developing technology.

Engineers from Airbus’ Commercial Aircraft and Defense and Space divisions worked with the RAF, Rolls-Royce and Airtanker to test the aircraft’s performance and handling on the ground and in the air in preparation for final flight with both engines 100% SAF powered. The Chief of the Air Staff, Air Chief Marshal Sir Mike Wigston, stressed how vital flying was to achieving climate goals:

Climate change is a transnational challenge that threatens our collective resilience, security and prosperity. That is why I have set the RAF the ambitious challenge of becoming the world’s first net zero air force by 2040. How we power our aircraft will be key to meeting this challenge and the RAF is already thinking about how which we are going to operate beyond fossil fuels. fuels.

This exciting test flight of an RAF Brize Norton Voyager powered entirely by sustainable aviation fuel is a milestone on that journey and marks another technology first for the RAF alongside our industry partners.

UL91 synthetic fuel is made by extracting hydrogen from water and carbon from atmospheric carbon dioxide, which is then pressurized and passed through by an electric current.