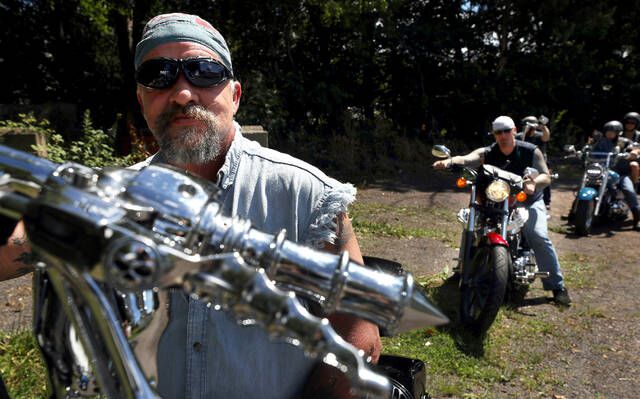 SLOCUM TWP. — A ‘poker race’ here on Saturday brought together nearly 100 motorcyclists to raise money for the township’s fire and ambulance service, hoping for luck.

The two-hour journey allowed participants to stop at five different stations along the route, for a playing card. When they finished the race, the biker with the best five-card poker hand won a cash prize.

But the participants said that if they won, they planned to donate the money to the cause.

Joe Jenkins, who just returned to Wilkes-Barre from Texas, said he hadn’t been on his motorcycle in two weeks because he was working on his house. Although temperatures on Saturday hovered around 90 degrees, Jenkins was undeterred.

Jenkins was looking forward to a bike show to be held at the end of the race.

Brian Larkin of Plymouth said he had the weekend off and felt it was a great way to spend a Saturday. “It’s a nice long drive,” he said. “It’s hot, but once you get rolling, it’s not bad.”

Helen Howe of Shavertown, said she and her husband Brian find motorcycles on Facebook. “We always ride for a cause,” she said.

Organizer Walter Kubilus said all money raised would be donated to Slocum Township Fire and Ambulance, to be spent as they would. He pointed to the rising costs of basic necessities such as fuel, equipment and training. Kubilis said the event, in its second year, was again blessed with good attendance and good weather. Ted Wiatrowski, also an organizer, said many riders have also served in fire and EMS, and were more than happy to spend time on their bikes raising money for a cause that often struggles to find a place. funding.

Many attendees were also looking forward to the food, music and bike show that concluded the day.

Joe Ohanion of Bikers for Justice said about six members of that organization attended Saturday’s event. Bikers for Justice, he said, aims to help charities and support victims of crime and other injustice. The Poker Ride, he said, allowed riders to enjoy a well-organized route, while raising funds for those who risk their lives to protect others.