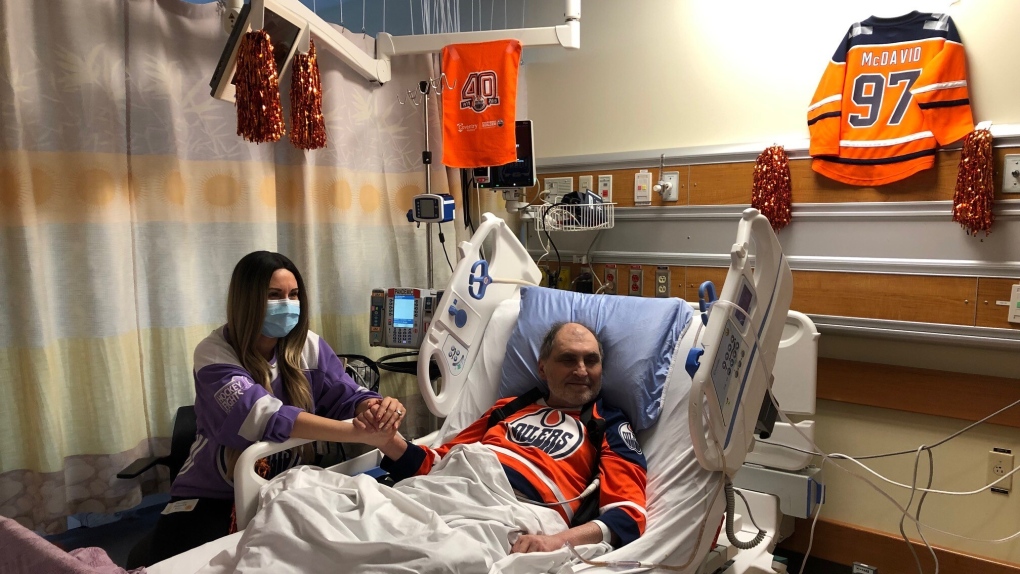 A Mazankowski Alberta Heart Institute patient is using the Edmonton Oilers’ playoff run as the boost he needs to get out of the hospital.

Patrycja Glynn and her father, Waldemar Fukacz, 66, bonded over hockey after immigrating to Canada from Poland in 1991.

“We saw this thing called hockey that wasn’t popular in Europe at the time,” Glynn said. “We realized there was this team called the Oilers, and we really got into it.”

The duo bonded over hockey and, now two decades later, are incredibly excited to see that Stanley Cup unfold.

“We believe in our boys,” Glynn said. “It will happen.”

Unfortunately, this playoff run has been different for the pair of superfans, with Fukacz admitted to Mazakowski in February after being diagnosed with severe cardiomyopathy. At first he was placed in an artificial coma.

“Instead of being at my house and cheering and having a few beers, he’s kind of stuck here,” she added. “It was quite difficult.”

While her father’s condition has improved, Glynn said there is still a long way to go to regain speech and mobility.

“Just the excitement, the adrenaline when they play, when they’re on the ice, when they go out, it just motivates them to do better,” Glynn said.

“It motivates him to try harder, and he knows he wants out of the hospital, so when they get into the finals after beating Colorado, he’ll love watching it at home with all his family and friends. “, she says.

“I will live another 31 years if I have to wait for the cup,” Fukacz said.

“I don’t think so. I think we’ll be good this year,” Glynn added with a laugh.

Fukacz’s rehab team says he’s a force to be reckoned with, much like Connor McDavid on the ice.

“Every day, he gets up, pushes himself,” says Natalie Shanahan, physiotherapist. “We are making gains.”

“Our goal is to get him home as soon as possible,” Shanahan added. “As strong as I can get. He’s such a fighter.”

Fukacz started growing his beard after his last operation and decorated his walker and hospital room. He says he won’t shave until the Oilers are crowned Stanley Cup champions.

“They wanted to shave me, but I said no, it’s the playoffs,” Fukacz said. “Come on Oilers, come on! »

He had a special message for Ben Stelter, the six-year-old Oilers ambassador who is battling cancer.

“I hope you can fight like me,” Fukacz said. “Never give up.”