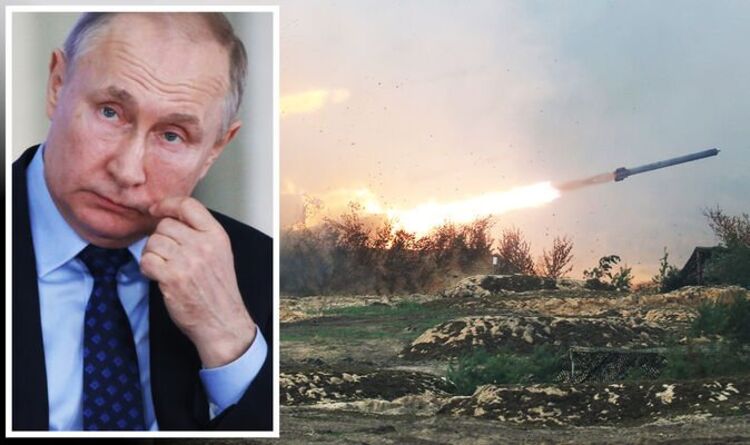 Sergei Bratchuk, the Ukrainian spokesman for the Odessa region, said a TOS-1A rocket launcher was fired at Russian troops near Izyum, located towards eastern Ukraine. The deadly rocket launcher had previously been seen in Russian armored convoys during the failed advance on the Ukrainian capital of kyiv. These tracked vehicles can fire “vacuum bombs” that suck in oxygen to create a destructive high-temperature explosion capable of damaging internal organs.

In recent days, there has been growing evidence that the Ukrainians managed to capture the launchers, which the Russians call solntsepyok or “blazing sun”.

In another video clip, a Ukrainian tractor was filmed dragging another of the rocket launchers across a field.

Elsewhere, Ukrainian troops were seen recovering the rotating blades of a KA-52 helicopter that had been shot down earlier.

The deadly TOS-1 had been developed by the Soviet Union, primarily for use in Afghanistan.

But this latest updated version captured by opposition soldiers has 24 barrels and an impressive range of over six miles.

Thermobaric warheads are capable of producing a destructive blast with a much larger blast radius than conventional weapons.

Upon impact, they disperse an incendiary aerosol into the air which is then ignited to create a massive fireball that absorbs oxygen from the atmosphere.

READ MORE: Orban revolts against the West as Hungary will pay Putin for gas in RUBLES

“It’s no wonder people react the way they do.

“I have no doubt that the international community, with Britain in the forefront, will once again act in concert to impose more sanctions and more penalties on Vladimir Putin’s regime.”

The comments come as the UK, US and European Union prepare to hit Russia with new sanctions for atrocities committed during the invasion of Ukraine.

On Tuesday, British Foreign Secretary Liz Truss said the economic sanctions imposed so far were having a crippling impact “and were “pushing Russia’s economy back into the Soviet era”.

She confirmed that more than £266bn of ‘Putin’s war chest’ had been frozen, rendering more than 60% of the regime’s £459bn of foreign currency reserves unavailable.