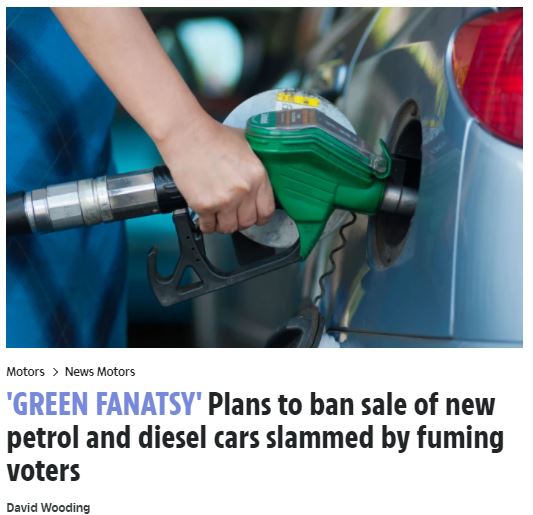 Dropping to a new low, The Sun bases a report on an investigation known to use a “charged” question to allege public resentment over the ban on the sale of new fossil-fuel cars.

The sun recently reported that ‘furious voters’ oppose the government’s 2030 ban on new petrol and diesel cars. The report cites a survey that alleges public resentment over plans to end the sale of new fossil-fuel cars.

The right-wing tabloid story refers to a study of 41,000 road users, supposedly including car, van and taxi drivers, truck drivers, cyclists, cyclists and walkers. According to the report, the survey shows that 79% of recipients believe it is unlikely or impossible for the Prime Minister to reach a net zero target in 2050.

Amid the so-called “growing anger” of motorists, there is, according to The sun“overwhelming support for a referendum on the government’s action to meet its net zero target for harmful emissions”.

The report claims the survey was organized by FairFuelUK founder Howard Cox alongside the Alliance of British Drivers and Motorcycle Action Group. Cox reportedly accused ministers of ‘green fantasy decrees’, warning that opposition to the decision to cut emissions could lead to a ‘slaughter at the ballot box’ for the Tories.

FairFuelUK and Net Zero Scrutiny are both known for their climate-skeptic credentials.

As DeSmog, an online resource for the global warming debate, reports, lobby group FairFuelUK is campaigning to reduce charges on diesel and petrol-powered vehicles, the most notable fuel tax. The group of climate change deniers oppose pricing clean air zones and regularly question the health effects of air pollution. The group claims to have the support of “key media” and 140 MPs.

He certainly seemed to have the support of The sunwhich takes up the conclusions of the group and the words of its president in his climate-skeptical report.

The Net Zero Scrutiny Group (NZSG) is also determined to bring opposition to green policies to the fore. The newly formed group is believed to have around 18 members in the House of Commons and is led by Steve Baker, Tory MP for Wycombe, and Craig Mackinlay, Tory MP for South Thanet, who was once Ukip’s deputy leader.

As the Guardian notes, the NZGS is apparently modeled after the European Research Group, which is also chaired by Baker, a climate “inactivist” who is pushing for “a huge political explosion” around net zero.

Not only Murdoch Sun cite research and commentary from climate change denial groups, but the survey he refers to – which formed the basis of the article – was found to be deliberately manipulated with a loaded question.

As ClimateChange.ie mentions, in a January online discussion hosted by climate denial group CAR26, Howard Cox said: “We just did a survey and we got 41,000 responses in 48 hours. And we said, ‘Are you getting accurate, reliable, objective information to believe in the government’s net zero aspirations argument in 2050 that would definitely impact your standard of living?

The admission of a “charged” question as part of the survey naturally entailed censorship.

Greg Archer, director of Transport and Environment (T&E), a leading European NGO campaigning for cleaner transport, said: “This was a bogus and loaded investigation. Many questions even prevented respondents who disagreed with FairFuelUK from expressing a different view.

“FairfuelUK represents a selfish and vocal minority of drivers who want to use their vehicle without being bothered by cyclists or pedestrians, and who don’t care about the pollution and damage they cause.

“FairfuelUK’s false facts have been discredited and this claim that a majority of the UK public opposes action to tackle the climate emergency is also a lie,” Archer continued.

The T&E director points to what he calls a “legitimate survey”, which shows that less than one in five people believe too much is spent on tackling climate change and protecting the environment.

As you are here, we have something to ask you. What we do here to deliver real news is more important than ever. But there’s a problem: we need readers like you to help us survive. We provide progressive and independent media that challenges the hateful rhetoric of the right. Together we can find the stories that get lost.

We are not funded by billionaire donors, but rely on readers contributing whatever they can afford to protect our independence. What we do is not free and we operate with few means. Can you help us by donating as little as £1 a week to help us survive? Whatever you can give, we really appreciate it – and we’ll make sure your money goes as far as it can go to deliver impactful news.