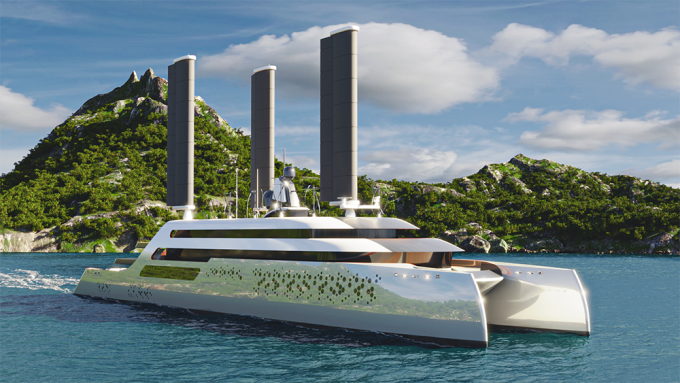 The epic 410-footer, dubbed Albatross, has been designed to harness wind, sun and sea to reduce its carbon footprint and energy consumption by 40%, according to the German yard. Like its namesake, the multihull can fly across the ocean with very little (if any) environmental impact.

Designed in partnership with Stay Sea Design, the cat is equipped with three wings totaling approximately 10,000 square feet that can produce 1,200 kW of power. Under sail alone, the vessel can reach around seven knots. Albatross is also equipped with over 12,000 square feet of solar panels that generate 120 kWh and five vertical wind turbines on the upper deck that can produce an additional 50 kWh under the right conditions. All clean, green energy is stored in the on-board lithium-ion battery.

Albatross has two different operating modes to ensure it is as fuel efficient as possible. In anchor mode, power is generated by six methanol fuel cells of 200 kW each. If renewable methanol is not available, electricity can be produced via one of the two 1,000 kW shaft generators installed. In sail mode, meanwhile, propulsion is provided by four 1,800 kW engines running on conventional gas. However, the amount of fuel used will be reduced due to the sail power of the ship. In terms of grunt, it promises an eco speed of 12 knots and a top speed of 15 knots.

The green philosophy also extends to the imposing cabin of 10,000 GT. All materials used in Albatross will be from sustainable sources. The generous living areas, which can accommodate up to 14 sailors and 46 crew members, offer several lounges and dining rooms, a large gym and a spa. Outside, the beach club sports an expansive infinity pool that connects two separate swim platforms.

“The goal was to integrate nature into the exterior and interior design using lots of glass, clear and delicate lines and open spaces,” said Karolina Maria Lass of Sea Design. Robb Report by email.

Another highlight are the two separate tender garages located in each of the respective hulls. Together they can hold four tenders and four Jet Skis. Each garage is also equipped with a crane and two fast charging stations. Between the two hulls is a 600 square foot flap, or “wave breaker” as Lloyd Werft calls it, which can be hydraulically extended into the sea to create a lunar pool for launching ships. Oh, and Albatross also has a helipad.

Of course, the vessel can be fully customized to the tastes of the owner. As Lloyd Werft’s Head of Projects and Sales, Friedrich Norden, says, “Anything is possible with the right amount of thought and investigation.”

Click here to see all the photos of Lloyd Werft’s Albatross catamaran concept.