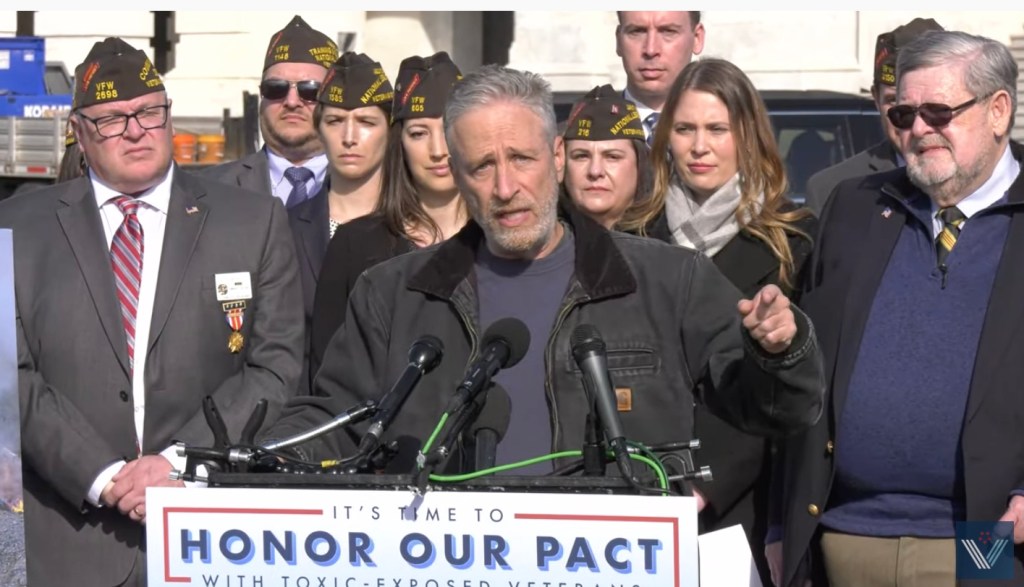 UPDATE, with statement from Rep Bost’s office: In his State of the Union address, President Joe Biden called on Congress to pass legislation to extend comprehensive health benefits to veterans who were exposed to toxic substances in Iraq and Afghanistan.

On Wednesday, Jon Stewart, a long-time advocate for the bill, warned against efforts to water it down.

Stewart said, “Make no mistake about it. We are Congress. It’s a place where what’s needed becomes what they can get away with, and we can’t allow that to happen in this final moment of their fight.

“They are going to go to the court tomorrow and there is going to be an amendment. And this amendment from Ranking Member Bost is going to say, “Hey, all these veterans service organizations and all these serving military got together with President Takano and President Pelosi and the President of the United States, and they designed a bill that will broadly address the urgent need of the veteran community. And Ranking Member Bost’s amendment will say, ‘Damn, that’s good work, so why not just change that, for five years extra health care. Are we alright? … F— This. Not happening. They are getting what they deserve – a comprehensive bill that addresses the urgent need of their community.

A Bost spokeswoman said: “Ranking member Bost strongly disagrees with Mr. Stewart’s misrepresentation of his efforts, but appreciates and shares his passion for the men and women who served. .”

The bill, the Honoring Our PACT Act, will be debated on Wednesday and is expected to be introduced on Thursday. The legislation makes veterans who have been exposed to toxic chemicals, such as those released from “burning pits,” eligible for VA medical care. Takano said it will affect more than 3.5 million veterans who were exposed to toxic fumes, linking their service to 23 respiratory diseases and cancers.

Stewart warned that even if passed, he could still stagnate in the Senate.

The military used burn pits to incinerate waste, hazardous materials and jet fuel, but troops who breathed in the toxic fumes reported a range of illnesses. In his speech, Biden noted that “many of the fittest, best-trained warriors in the world” are “never the same: headaches, numbness, dizziness, cancer that would put them in a coffin covered with a flag”.

At this point in her speech, Rep. Lauren Boebert (R-CO) heckled the president, shouting, “You put them in. Thirteen of them.” She was then booed.

Biden went on to say that the brain cancer that killed his son, Beau, may have been related to his exposure to fire pits while serving in Iraq and Kosovo. “I’m determined to find out whatever we can,” Biden said.