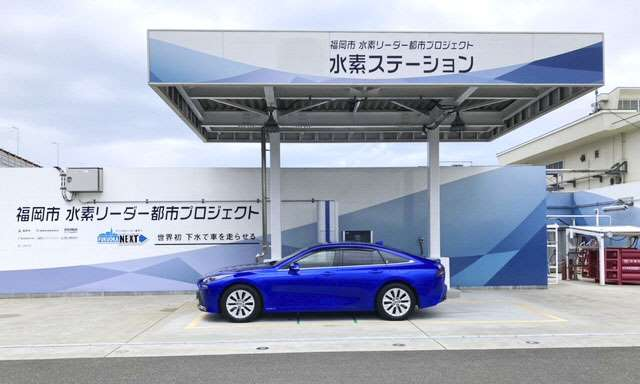 Hydrogen made from sewage powers fuel cell vehicles in Fukuoka

Hydrogen made from sewage powers fuel cell vehicles in Fukuoka.

Fukuoka will be the first city in Japan to commercialize hydrogen fuel from wastewater treatment for use in fuel cell vehicles (FCVs).

The city of Fukuoka and Saibu Gas have announced the creation of a council aimed at popularizing the use of hydrogen produced from biogas generated by wastewater treatment.

From September 26, hydrogen stations operating in the city will start supplying hydrogen to fuel cell vehicles (FCVs). This is the first commercial use of wastewater-derived hydrogen as a fuel for FCVs in Japan.

Other participants in the new council include the Toyota Tsusho Corporation. The council is also collaborating with Kyushu University to conduct research on cost reduction.

Expectations are high that FCVs, which do not emit carbon dioxide (CO2), will become the next generation of environmentally friendly cars.

Hydrogen is produced when methane extracted from biogas reacts with water vapour. In just 12 hours of operation, enough hydrogen can be produced to fill 60 FCV. The city of Fukuoka was selected by the Ministry of Land, Infrastructure, Transport and Tourism (MLIT) in 2014 to operate a hydrogen demonstration station.

The city will take over the facilities from the national government and operate the station.