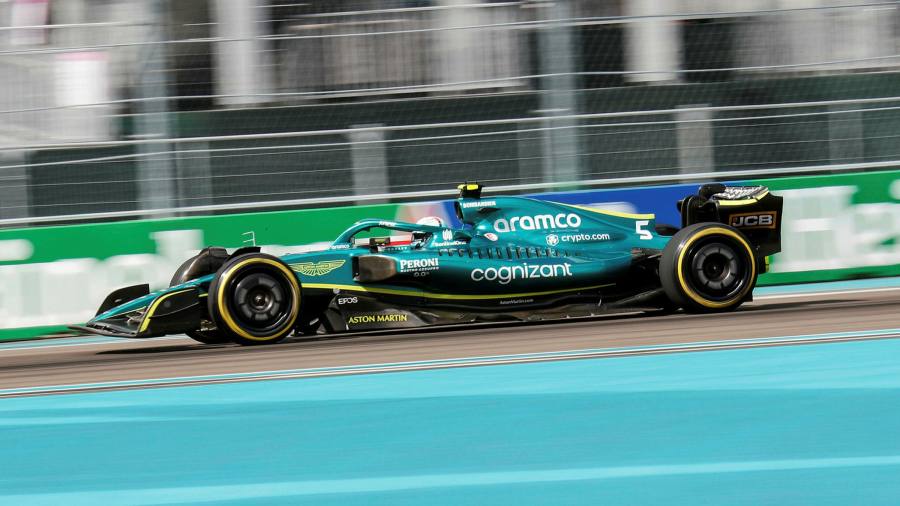 You could be forgiven for thinking that gas-guzzling, high-lifetime Formula 1 should be kicked and screamed towards net-zero emissions targets. But for the top engineers who are the backbone of the sport, the climate challenge is an irresistible problem to solve.

“It’s a daunting task because we’re exploring frontiers we haven’t explored before,” said Pat Symonds, F1’s chief technology officer. “But it’s a worthwhile challenge because it’s a way for motorsport to contribute to society.”

It’s been two and a half years since the sport announced it would achieve net zero emissions by 2030. An audit of its carbon emissions in 2018 showed the 21-race season produced 256,551 tonnes of CO₂.

Most of those emissions – 45% – came from its air, land and overseas logistics, as it moved thousands of tonnes of cargo from run to run.

A further 27.7% came from business travel for F1 teams, staff and partners; 19.3% of team factories and offices; and 7.3% of race days, where generators are used to power the circuit and provide emissions. Just 0.7% of the sport’s emissions came from the use of fuel by its teams in its races and during testing.

However, while fuel consumption is by far the sport’s smallest contribution to its CO₂ output, F1 says gains made here could have a “multiplier effect” in the global transport sector, provided that fuels high-performance greens it drives are more widely adopted. by oil companies and car manufacturers.

F1 cars have switched this season to a version of E10 fuel made by Aramco, the Saudi oil company. It is a mixture of 90% fossil fuel and 10% ethanol. There is a slight drop in power output compared to the fuel the cars used last year, from around 44 megajoules per kilogram to between 43 and 42 MJ/kg this season, which has drawn grumbling from some teams about a drop in performance.

Symonds champions change. E10 packs a lot of punch, he says, adding, “It’s a really good fuel. The move applies to all teams, so no one is disadvantaged.

The sport currently uses around 1 million liters of fuel a year, mostly for testing, but Symonds says that by 2026 engine, fuel and other efficiencies will cut that in half.

By then, Aramco and F1 plan to have switched to 100% green fuel, which will involve the capture of CO₂ and low-carbon hydrogen in its manufacture. This will reduce greenhouse gas emissions by 65%.

The four-year window to adopt green fuel does not worry Symonds. “This movement is cutting edge,” he says. “This type of fuel already exists but not in the quantities we need to make a season and carry out tests. We need factories of reasonable size to do this, and a few should open in 2023.”

At least two large-scale biofuel plants are expected to start production in Saudi Arabia and Bilbao in Spain next year, Symonds said.

Aramco provided funding to help develop the fuel and it is also supporting teams to perform testing. The world’s biggest oil exporter and F1 have agreed that new fuel in 2026 must deliver at least 42 MJ/kg.

“Combustion engines in F1 are the most efficient on the planet and are something any automaker would love to achieve,” said Ahmad al-Khowaiter, chief technology officer at Aramco. “We want to take this technology from racing to the road car, which is in the roots of F1. [The motorsport] in recent years has become less relevant but, with this technology, it is becoming more relevant.

Work on the engine design was essentially halted in March when the racing season started, although some changes are allowed until September to allow teams to prepare for the introduction of hybrid engines in 2026.

Team budgets are limited to around $145 million this year, and between $10 million and over $100 million can be spent on engine designs, depending on whether a team buys an engine from a manufacturer or designs their own.

Symonds says restrictions imposed by the sport will limit the amount teams can spend on the internal combustion engine, but they can instead focus on electrical systems.

He adds: “We want to see improvements in the design of electrical systems. This can range from fast charging batteries to how power electronics connect to the motor.

Away from the cars, F1 has already made a series of changes to its operations to reduce emissions. In 2020 the sport introduced remote broadcast operations, based at its Kent media centre, which houses 165 staff on race weekends. This meant he could cut the 70 tonnes of broadcast freight he sent on each run by 34%, as well as cut on-site staff by 36%.

By 2025, the sport wants all of its races to qualify as sustainable events, meaning circuits must focus on things like energy, waste and public transport.

Racetracks in France and Canada have started using solar panels to offset emissions generated during grand prix weekends. And, for the Dutch Grand Prix at Zandvoort in 2021, 25,000 spectators took to the circuit by bike plus 40,000 by public transport, after most private cars were banned from coming to the race. F1 banned single-use plastic bottles at all racetracks for its staff and teams in 2021 and, in the same year, Silverstone donated more than 1.9 tonnes of leftover food from its race weekend to a food Bank.

But these changes may not be enough to make a significant difference to the sport’s total emissions. “Formula 1’s carbon footprint represents more than half of Bermuda’s annual emissions,” said Greenpeace UK policy director Doug Parr. “Burning gasoline for fun will never be green, even if you’ve gone from E5 to E10, but neither will flying these cars around the world every two weeks for three-quarters of the year. The industry has a long way to go.

According to the latest Motorsport Carbon Emissions Audit, in 2020 there was an almost 40% reduction in CO₂ emissions during a 17-race season that was heavily affected by the pandemic. Most of the races have taken place in Europe – some have even been held in the same location in succession – and only the events in Bahrain and Abu Dhabi have taken the sport away from the continent. This meant that travel and championship logistics were greatly reduced.

With races and attendance nearly back to pre-pandemic levels, the sport will have to wait until the end of this season to assess the effectiveness of its changes over the past two years.