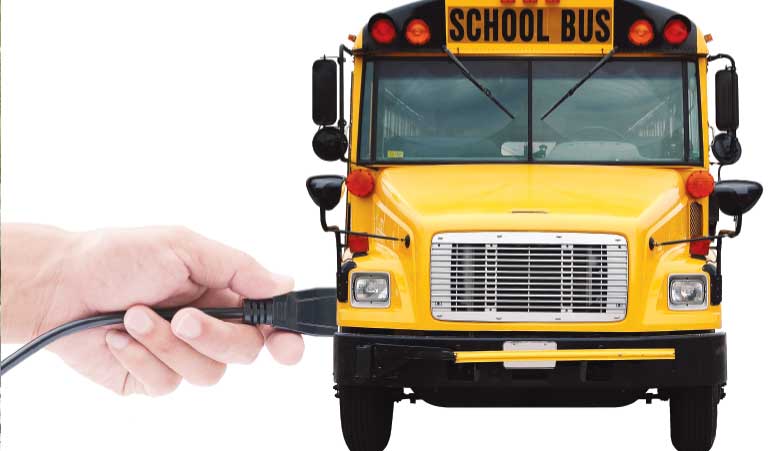 “Going to school shouldn’t include a daily dose of toxic pollution,” he said.

Hard to argue with that. And O’Malley is just getting started.

“The transition to fully electric buses would first and foremost ensure that our children have a clean and healthy journey to school,” he said. “But, beyond that, it also presents a great opportunity to make dramatic improvements to our state’s electrical grid, delivering significant new benefits to communities.”

Like everything about the green power push, the end result sounds good. Getting there, however, is not easy.

Last week, billions of federal dollars began being made available to school districts across the country to transition to clean, electric school buses. With funding from the bipartisan Infrastructure Act, the Federal Environmental Protection Agency’s new Clean School Bus program will provide $5 billion over the next five years (fiscal years 2022-2026) to replace buses existing school buildings with zero-emission and low-emission models.

The EPA is offering $500 million through the 2022 Clean School Bus Rebates for zero- and low-emission school bus rebates as the first funding opportunity.

The New Jersey Environment Research & Policy Center said the need is there. He said most of the country’s nearly half a million school buses run on diesel. On a typical school day in New Jersey, more than 800,000 students commute to school in one of the state’s 15,000 diesel school buses.

The report follows the legislative review of S759/A1282, which will invest more than $45 million in electric school buses over the next three years.

The report, which is captioned “Unleashing the Power of School Transportation to Build Resilience and a Clean Energy Future,” concludes that if every yellow school bus currently in service in New Jersey were replaced with an electric bus equipped with the right vehicle for -grid technology, this would add more than 2,179 megawatt hours to the state’s ability to store electricity, enough to power more than 68,142 average American homes for a day.

James Horrox, lead author of the report, said the move is part of a clean energy future.

Electric school buses and the network

The report provides recommendations for legislators, utility companies and schools, including:

“The renewable and resilient electricity system of the future will rely on batteries to store clean electricity,” he said. “Electric school buses with vehicle-to-grid technology can play an important role in building this system, even as they purify the air our children breathe today.”

The moment has the support of some key lawmakers.

“School buses are known to emit greenhouse gases and carcinogens, both of which contribute to climate change and threaten those exposed with high lifetime risks of developing cancer, asthma and heart disease. “, did he declare. “As a state, we aim to significantly reduce our carbon emissions and become a greener place to live.

“The transition from conventional diesel buses to zero-emissions ones will significantly reduce our state’s pollution levels.”

This additional storage could accelerate the transition to a renewable energy grid and reduce greenhouse gas emissions from the transportation and power generation sectors. As electric school buses are typically only used for specific short periods of time, the buses could absorb renewable energy when it is abundantly available and release it during times when it is not, such as at night. It could also allow electric school buses to provide additional power during unexpected peaks in demand or backup power during outages. Electric utilities and system operators could compensate school districts for the network services provided by their buses, saving school districts a lot of money over time.

Bill Beren, transportation president for the New Jersey chapter of the Sierra Club, said the state needs to get back to its game.

“New Jersey lags far behind other states in the region when it comes to electrifying the state’s school bus fleet,” he said.

O’Malley said it all made perfect sense.

“Children need a clean route to school and a future powered by reliable, renewable energy,” he said. “By fully harnessing the power of electric school bus technology, we can invest in cleaner and more efficient transportation and energy systems at the same time.”