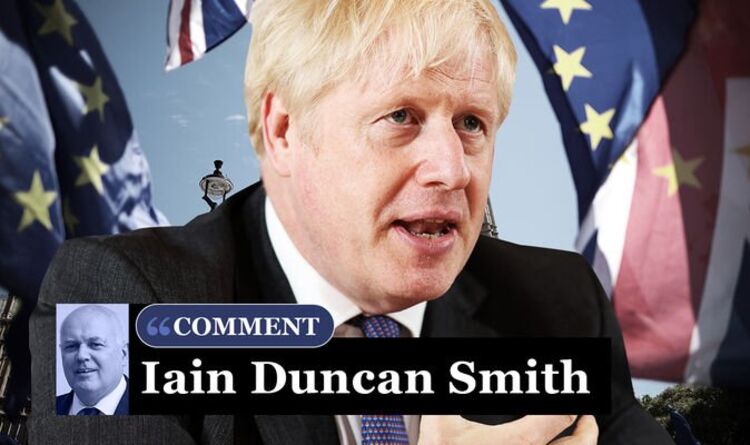 The welcome withdrawal of some of those who worked for him at Downing St and the arrival of new people are a start. However, I have been in Parliament long enough to know that such change alone does not address public priorities. That is, unless it is accompanied by something more – the delivery of promises, made in the last election. Looking back, Boris Johnson, despite enormous pressure, often got it right. For example, the bold investment in the private sector to quickly create a Covid vaccine.

Deploy the vaccine sooner than the EU by not joining their bureaucratic plan. And finally making sure we had enough shots to give all the adults three shots. Such decisions will have saved many lives and Boris was responsible for them.

Yet, as the occasional breach of the rules in Downing Street shows, systemic change is needed if the British people are able to signal their approval of this government.

The structure around the Prime Minister must also be of the highest quality with discipline at all levels. Perhaps the best example a Prime Minister can have of discipline and clear structure is that of Margaret Thatcher. Under her, Downing Street was efficient and focused on delivery and therefore able to ensure she delivered on her promises.

This government must remember that despite Covid it was elected to deliver Brexit benefits, raise the bar and lower taxes. Although mired for the better part of two years in the Covid crisis, what remains all too clear is that he has yet to make inroads on those priorities.

However, as it does, it must also tackle the cost of living crisis first. Importantly, as this will hit the poorest hardest, it should do nothing to make the situation worse. To that end, why increase National Insurance to fund social care and NHS backlog reduction now?

Boris Johnson is under pressure to deliver Brexit (Image: Getty)

Whatever the need for the money, many economists question the need right now to raise National Insurance rates to do so. Indeed, the Chancellor has more financial leeway than seemed likely last fall and can still achieve his long-term fiscal goals. It should at least pause the rise in the NI.

There is another reason. Such an increase will not just add a burden to individuals, it will slow the economy at a time of mounting pressure. After all, if the Chancellor takes more from people’s incomes, they will reduce their consumption, which will lead to slower growth, and growth is of crucial importance right now.

In fact, the government could go further to ease the pressure by removing VAT on fuel and green products. After all, we committed to taking care of VAT when we left the EU.

We also got a real reminder of how gas is still vital to our economy. Sitting on huge gas reserves in the UK, surely we should be looking to produce more of our own gas. After all, as the government’s own figures show, using UK gas would increase tax revenue and produce less CO2 than the imported gas we have to use at the moment and, most importantly, it will give us security of supply .

Now that the Bank of England is forecasting two years of falling real incomes, the government must revert to the Conservative principle that reducing the tax burden on businesses and individuals actually increases tax revenue. The government should not think it can wait to cut taxes until later, it has to start now, or it risks appearing cynical later.

If we really want to get up to speed, we should accelerate the rollout of freeports across the UK, including Northern Ireland. I can’t understand the delay. These will need duty reductions and, most importantly, tax-exempt status.

If done correctly, they will give a huge boost to areas that have been left behind for too long. Businesses will move to these areas to take advantage of the lower cost base and job creation will bring new skills and investment to often run-down locations.

On top of that, the government now needs to speed up changes to our often burdensome EU regulations. One of the main reasons we left the EU was the opportunity it offered to shape our regulations to UK needs.

I wrote a report for the government last year and along with others identified over 100 regulations that could change immediately. We calculated that this alone would release billions of private capital into the UK economy, creating new global markets that would be UK-centric. Yet nothing has been done yet.

It was, even in the terms of the agreement, always agreed to be temporary. It must be replaced or as it is it will damage the Good Friday Agreement, which the EU has said it wants to protect. There are alternatives which would not require border controls but which would guarantee the protection of the single market on both sides.

This must be the government’s immediate priority. After all, it is abhorrent that a constitutional part of the UK cannot fully play its role in the rest of the UK, which must change first.

Above all, the government must demonstrate real urgency and dynamism. The government will be judged on its ability to deliver on its promises. The prime minister is now expected to put a sign on every secretary of state’s desk that simply says ‘Action Today’.