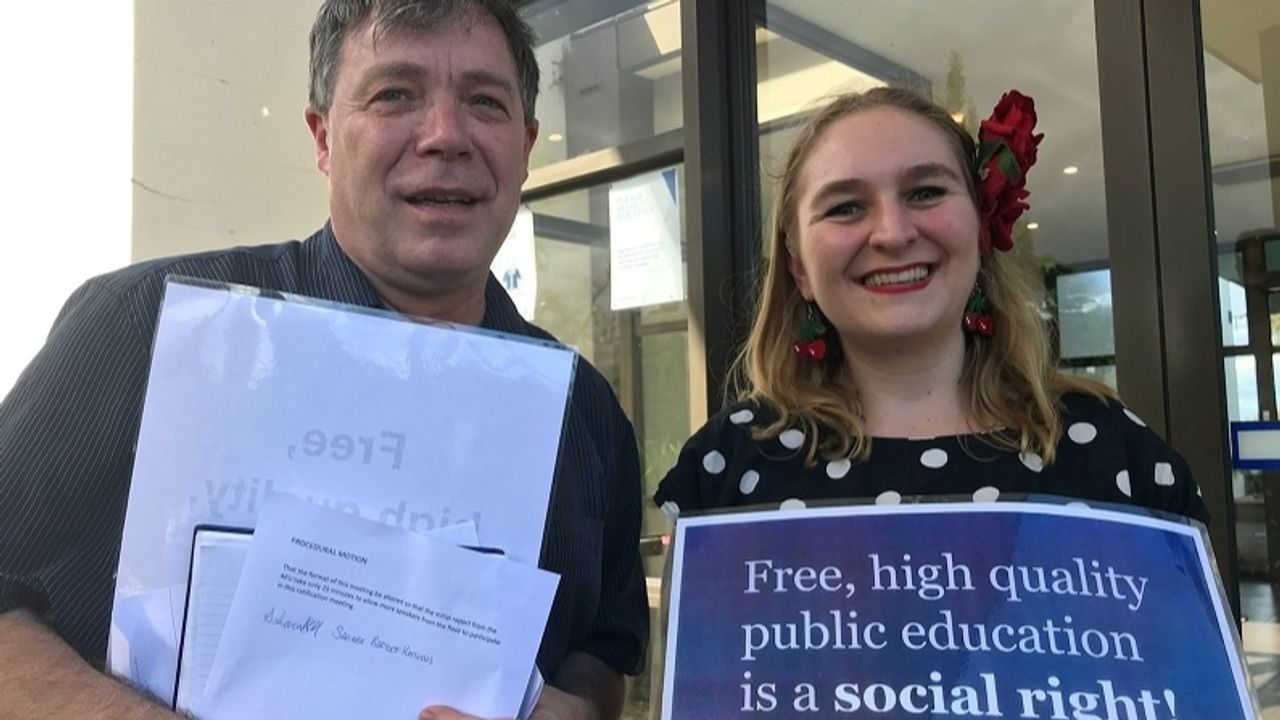 Delegate meetings convened by the Australian Education Union (AEU) continue this month in regional and metropolitan Victoria. Through these anti-democratic events, the union bureaucracy is trying to push through a sell-out industrial deal it brokered with the state Labor government.

The fight for the “no” vote is led by the Committee for Public Instruction (CFPE), which is the only political tendency to have published press releases and organized public meetings on the draft agreement. The CFPE also created a Facebook group to coordinate and discuss opposition to the deal, with more than 400 teachers and school workers now involved. Teachers reported on the Majority Votes page “No” to the agreement from dozens of schools. CFPE activists have also spoken to teachers and school staff at various delegate meetings held in Melbourne, as well as in the regional town of Shepparton.

The first meeting of delegates, held last Monday at the AEU’s central office in Melbourne’s inner suburb of Abbotsford, provided a stark demonstration of the growing disaffection and hostility felt by many teachers towards the syndicate. Only about 30 school staff attended the meeting, far fewer than at similar meetings held to ratify previous agreements. In previous years, attendance has been packed and standing room only. Last Monday, however, only a small minority of chairs were occupied.

Concerns about COVID-19 infection were likely a factor. The AEU organized the meeting in accordance with its solidarity support for federal and state normalization of daily mass infection, which includes its collaboration with the reopening of schools earlier this year. The indoor meeting involved few mitigations, with several union officials appearing without masks.

The low attendance was not solely, or even primarily, due to COVID. There is widespread disgust with the union over the proposed deal, which follows two decades of similar betrayals of salaries and conditions for teachers and school workers (see: “The record of ‘Australian Education Union’). When the deal was unveiled, many teachers took to social media to denounce the bureaucracy and explain that they were leaving the AEU. Many experienced teachers know from bitter experience that democratic discussion within the parameters set by the union is impossible.

The union bureaucracy designed the delegates’ meetings to suppress and isolate the opposition. A mass meeting of teachers and school workers has not been held in Victoria since 2013. This year, a mass online meeting could easily have been held, allowing teachers to safely participate in a debate and find out different perspectives on the proposed agreement.

Instead, 29 delegate meetings are being called statewide, ending March 17. These are dominated by bureaucracy, with union officials consuming the vast majority of available time.

At the Abbotsford delegates meeting, AEU State Vice President Justin Mullaly (annual salary and benefits $234,000) presented the opening report promoting the agreement , speaking for about 20 minutes. He then spent roughly the same amount of time answering questions, then spoke again when the motion to approve the deal was formally introduced, and then again at the end of the meeting when he got the “right of reply” following the limited discussion that proceeded.

The CFPE and World Socialist Website previously exposed the draft deal and the AEU misinformation that accompanied it.

Mullaly insisted that while “no deal is perfect”, the union’s deal with the government was “comprehensive” and offered a “great opportunity to recruit” new AEU members. He said a reduction of one-and-a-half hours of face-to-face teaching per week, to be phased in over the next two years, was “reason enough to vote yes”, despite the burden of teaching work which remains among the highest in the world and without anything substantial. made to reduce the administrative tasks of teachers.

Mullaly has desperately tried to defend the wage component of the deal, which involves a significant reduction in real wages. Base salaries are to increase by only 1% every 6 months during the four-year agreement. That’s less than 2% per year, because the first 1% is paid for only 6 months, so that’s an increase of 0.5%. This follows a wage freeze that took effect last year after the previous deal expired.

Different salary level bonuses and reclassifications will increase pay levels slightly. Mullaly insisted that over the four years teachers would see a 9.31% salary increase and an additional 4% in allowances, but this is still below the cost of living increase.

The union is trying to deny that it is responsible for a drop in real wages, on the grounds that Melbourne’s official inflation rate (2.5%) is lower than the national rate (3.5%). Mullaly added that the State Treasury Department predicted inflation of 2% in Victoria next year. This is all blatant misinformation. Melbourne’s below-average inflation rate largely reflects a decline in property prices that will almost certainly prove temporary. The financial press is rife with commentary about the next wave of inflationary pressures, well above the Treasury’s low estimate.

Moreover, official inflation calculations severely underestimate the real impact on the working class of the rising costs of “non-discretionary” items – fuel, food, housing and other essentials. There is no doubt that if the agreement passes, teachers will be worse off.

CFPE members spoke out against the deal during the brief discussion period at the Abbotsford meeting.

Will Marshall, a veteran high school teacher, outlined the union’s demands on workload, wages and provisions covering education support staff. He condemned the union’s censorship of discussions on his Facebook page, which saw many comments opposing the draft agreement deleted and other comments blocked by site administrators. Marshall also tied the sales deal with union support for reopening schools amid widespread community transmission of COVID-19.

“How can we trust the AEU, which has been happy to go with the state government and send us to schools where we know COVID is present?” He asked. “In the first two weeks of the new school year alone in Victoria, more than 18,000 pupils have tested positive, and 1,900 staff have also tested positive. Tragically, two weeks ago a teacher died of COVID in New South Wales. It is clear that the government and the union do not care how many of us are infected and put at risk. »

Reflecting the AEU’s sensitivity to any criticism of its role in the ongoing pandemic, the chair of the meeting, Union State President Meredith Peace, intervened to try to stop Marshall from talking about COVID. , insisting he had to “speak the motion”, that is, support or oppose the deal.

CFPE encourages teachers attending delegate meetings to contact us and send in reports from your area.

As we noted in our February 7 statement: “The opposition must now be organized and politically led. The Committee for Public Education urges the formation of rank-and-file committees in every school, independent of the AEU. They must get in touch, exchange precise information on the draft agreement as well as on the situation in schools, in particular on the COVID-19 crisis…

“The fight against the agreement is above all a political fight. Decent wages and working conditions cannot be guaranteed under conditions of massive COVID-19 infection, nor amid the continued breakdown of the public education system. Teachers, education support staff, students and families must fight to develop the broadest movement against the entire political establishment, reach out to other sections of the working class facing similar attacks and, on this basis, establish the social right for every child to receive the highest quality public education, provided free of charge and the social right of every educator to receive the salary, conditions and resources necessary to be able to do its working properly.

Get updates and information on the fight against the dangerous reopening of schools.