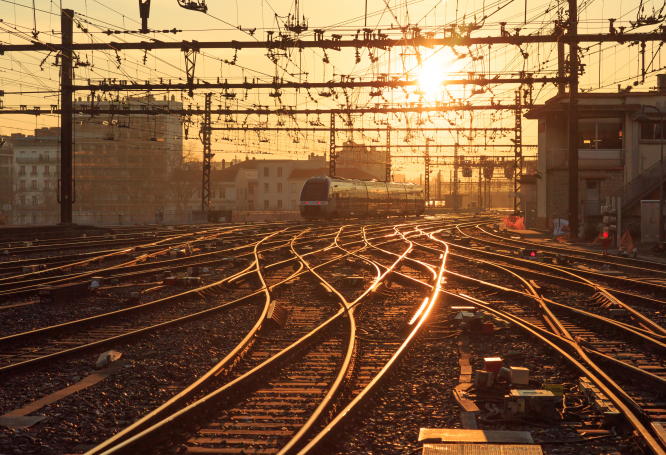 Railcoop, a railway cooperative based in the Lot, launched its first freight line last November between Decazeville-Viviez (Aveyron) and Toulouse-St-Jory, in an area poorly served by road and rail.

A Bordeaux-Lyon passenger service is now on track for launch in December.

The objective is to offer long-distance rail travel with trains running at the speed of regional TERs.

The company is run by a brother and a sister, after the first, the civil engineer Nicolas Debaisieux, left city life to settle in Carjac, a small town in the Lot.

There he found a group of people interested in projects that combined green principles with social benefits, and this led to the idea of ​​a railway cooperative to revitalize disused lines.

The freight line provides a sustainable transport link between Toulouse, the headquarters of Airbus, and the Lot valley, a hub for the manufacture of aeronautical components.

Railcoop Chairman Dominique Guerrée, who has dedicated his career to developing cooperative business models, said his success to date was based on daily departures, which offer an innovative shuttle service that guarantees regular deliveries and collection scrap metal.

“Ensuring consistent service is crucial in trying to regain confidence in rail transport as, over the years, companies have tended to opt for more flexible (and cheaper) road transport solutions,” he said. he declares.

However, growing environmental concerns have led a number of companies to express interest in integrating the cooperative’s rail transport solutions into existing supply chains.

The current rolling stock consists of two locomotives leased from Deutsche Bahn (DB), which operate on the freight line with 24 type R26 boxcars in tow.

The locomotives are fueled by diesel, but the environmental impact is still significantly lower than that of the road, and Railcoop is considering a transition to biomethane fuel in the future with the delivery of new customized engines.

A fleet of second-hand X72500 passenger trains (ex-TER) will enter the workshop for retrofitting next month and will be operational for the launch of three passenger services on 11 December.

Direct services will link Lyon to the terminus of Bordeaux, Montluçon and Limoges.

The direct Lyon-Bordeaux link, discontinued by SNCF in 2014, will run twice a day and cost around €37-40 for a seven-hour, 30-minute journey. This is the cost of a carpooling trip between the two cities.

Local foods will be served.

Alexandra Debaisieux, Deputy Managing Director of Railcoop, previously told The Connexion: “The lines are still maintained and used by SNCF but only for local services. There is no train between the two big cities. The only option is to wait for a connection.

Our trains will be comfortable, with separate carriages for those who want to work quietly over Wi-Fi and those traveling in groups. Each will have a freight car, so people can easily load trunks, suitcases, surfboards, skis or bicycles.

The Montluçon train will offer an early morning shuttle solution which currently does not exist.

The lines are disused SNCF network lines, Railcoop services being considered as complementary elements of the rail transport economy.

Railcoop is already working in partnership with various local authorities, including the Occitanie Region and Auvergne Rhône-Alpes, who see the reopening of the old SNCF lines as a means of revitalizing their territories and boosting the economic and tourist sectors.

“Local mayors regularly call us to meetings, asking us to put their towns back on the map,” Guerrée said.

The cooperative is proud of its solid social roots.

Mr. Guerrée explained that the choice of Decazeville-Viviez as a freight hub was not only due to its proximity to Railcoop’s head office in Figeac, it was also an excellent opportunity to help revitalize Decazeville, a former center mining and steel production.

The city has never recovered economically from the pit and smelter closures, but local industry representatives see the freight line as a chance to innovate in different directions.

Railcoop’s philosophy is also influenced by the founding principles of the International Cooperative Alliance, including sharing information and resources with other cooperatives and community organizations.

There is even a local Railcoop discussion group – a railway circle of enthusiasts and experts dedicated to providing logistics solutions.

“No other functional rail cooperatives exist in the European Union, but we plan to work with others in the future once they are up and running,” Guerrée said.

The opportunity to invest in the company has not been lost on social activists and those wishing to rethink the economy and explore new transport solutions.

The latest figures for Railcoop shareholders stand at around 11,000, many of whom are attracted not only by the return on investment, but also by the opportunity to act for change.

In an exhortation to English-speaking residents, Mr Guerrée said: “It’s a great way to invest in French society, to make a difference, and you don’t have to be a French citizen.”

The company is also expanding in other ways with an expected increase of 30-40 employees imminent.

Find out more on railcoop.fr