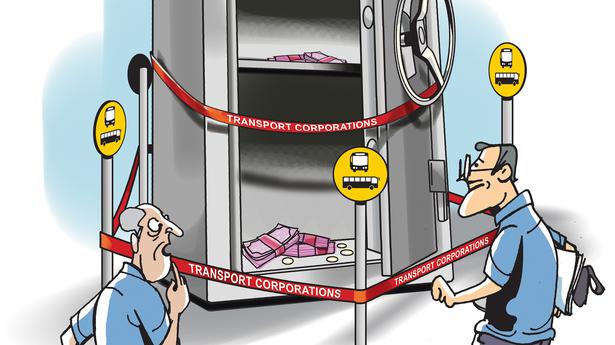 A brake on pensions

Transport retirees in Tamil Nadu find themselves in a situation where, after years of hard work, they are now forced to wait indefinitely for their terminal dues to be received. Many futures are in jeopardy because of this situation caused by chronic financial mismanagement, rising retirement ages, rising fuel prices and the general economic downturn.

Transport retirees in Tamil Nadu find themselves in a situation where, after years of hard work, they are now forced to wait indefinitely for their terminal dues to be received. Many futures are in jeopardy because of this situation caused by chronic financial mismanagement, rising retirement ages, rising fuel prices and the general economic downturn.

For many, the labors of an active life are made bearable by the promise of retirement benefits that come in handy after years of service. This includes the pension, the amount of gratuities, the provident fund and paid holidays.

But for thousands of State Transit Corporation (STC) employees, while work life is hectic and stressful, it’s been a story of financial struggle since retirement day. They had to fight at every stage of their tenure to obtain either a legitimate salary review or raises and other compensation. And for those about to retire and contemplating a better life, a bigger shock awaits: disproportionate delays in the payment of their retirement benefits.

The pathetic situation of transport workers being sent home empty-handed is not a new phenomenon as government after government has treated them the same. But employees of other government companies do not face such a situation. Transportation workers play an important role in the safe transportation of hundreds of thousands of commuters and in daily socio-economic activities. But their economic situation has always remained bleak.


P. Balakrishnan, who retired from the Metropolitan Transport Corporation (MTC) in May 2019, had to wait 18 months to get his amount including provident fund, cash out of earned leave and gratuity. Though 18 months was thought to be a longer period, Pugazhendi, who retired in December 2015, is awaiting his settlement because “the ministerial action taken against him for irregular leave” is up for years, although his retirement order has been voted on. .

Pointing to court orders that the employer had no right to punish a retired employee by withholding pension benefits, Mr Pugazhendi said officials acted in defiance of the court in his case. He said STCs are the most vindictive organizations that would punish employees for even trivial mistakes.

V. Dayanandam, an official from the Center of Indian Trade Unions (CITU), said, “On the day of retirement, a railway employee leaves with a big smile and his pension check in hand, while all this, a state transportation worker receives a relief order, worksheet, dhoti, and candy packet on his retirement day. The worksheet contains the terminal gratuity, provident fund benefits, contributory pension plan, buyout leave salary and commutations. But the employee does not know when the check will be delivered. Even the amount of the pension takes 2 to 3 months to be deposited in his bank account. Above all, the arrears of high cost allowances (DA) to retirees were stopped in 2015; they’ve been waiting for 80 months.

R. Subramanian, who retired on June 30 this year from the MTC, foresees undue hardship, assuming he might not collect his pension contributions on time. He plans to marry off his daughter and financially help his son pursue higher education. On the day of his retirement, he refused to accept the dhoti and the sweet packet in protest.

Of all the eight STCs, it is the employees of the State Express Transport Corporation (SETC) who consider themselves lucky to be sent home with a check for ₹2 lakh on the day of retirement. Employees retiring from other STCs are faced with financial constraints from the day of retirement due to the lack of a constant income and the delay in the payment of end-of-career benefits. This has caused a lot of resentment among employees, especially those dealing with health issues and personal commitments.

The money deducted from the salary of any employee covered by a social protection scheme is also not paid to him on the day of his retirement. The CITU, affiliated to the CPI(M), an ally of the ruling DMK party, organized protests against the delay in the payment of contributions to retiring employees and the arrears of high cost allowances and demanded an increase in other allowances.


Mohammad Ali Jinnah of the Pudukottai district, a member of the technical staff, started a new demonstration on the day of his retirement on June 30. He brought members of his family with him to protest outside the bus depot. The video has gone viral on social media, but it has yet to get its benefits. Several retired employees followed suit and picketed the deposits with their families.

Employees and unions also deplore that several social measures, listed in the request for subsidies from the Ministry of Transport to the Assembly, remain only on paper. Some of the measures include marriage advance to dependents, reimbursement of legal fees, festival advance of ₹10,000 per year, health insurance and free uniform and washing allowances.

The reasons often cited by the Ministry of Transport are the financial crisis, the operation of buses on unprofitable routes and the huge cost of employees for the STCs, including MTC, Coimbatore, Madurai, Salem, Kumbakonam, Tirunelveli, Villupuram and the SETC. All eight STCs are in the red, with the transport department struggling to manage even day-to-day operations.

While officials may cite higher wage costs and rising diesel prices for the fate of STCs, union leaders blame STCs for ‘abusing’ employees’ provident fund contribution and other benefits pension for day-to-day operations.

With all employee funds wiped out, the Department of Transportation is dependent on the state through various grants to pay employee dues. The state distributes the funds piecemeal, keeping retired employees in suspense.

“Not a commercial enterprise”


S. Bhaktavatsalu, Vice President of Arasanga Pokkuvarathu Uzhiyar Sangam, said STCs are not a business venture to be run profitably as they serve the important social purpose of transporting members of the public at an economic cost. He said there are more than 1,000 routes, especially in mountainous and remote areas, where only STCs operate.

K. Natarajan, Treasurer of LPF, said that the 10-year reign of AIADMK has ruined STCs through wrong decisions such as privatization of profitable courier service, handing over of profitable routes to private operators in moffusil areas and the inability to extend long-distance services. of the State Express Transport Corporation.

Thanking Chief Minister MK Stalin and Transport Minister SS Sivasankar for accepting, in principle, the demands presented by the LPF-led unions, he said a base salary increase pending for several years and allowances, and a one-time promotion for technical staff. members are the highlights of the 14th salary negotiations.

Stressing that any wage issue tends to be emotional, senior Transport Ministry officials were unwilling to talk about steps taken to settle pension contributions. A senior official said that steps were being taken to settle the dues as the officials were trying their best to mobilize the resources as the finances of the STCs were not great.